The sky over the vineyards of Glenora and the shores of Seneca is cloudy on this the first Sunday morning of October 2019. The temperature is 54 degrees with a feel like reading of 49 degrees, a result of the wind which is coming from the south at 15 miles per hour-it appears that we are in for a windy day!

More weather news: Saturday morning brought about some very cold temperatures and some frost in the higher elevations. Although the editor did scrape some frozen dew off his windshield Saturday morning, the coldest we recorded in any of our vineyard locations was 37 degrees. This coming week looks much better for harvesting -drier. 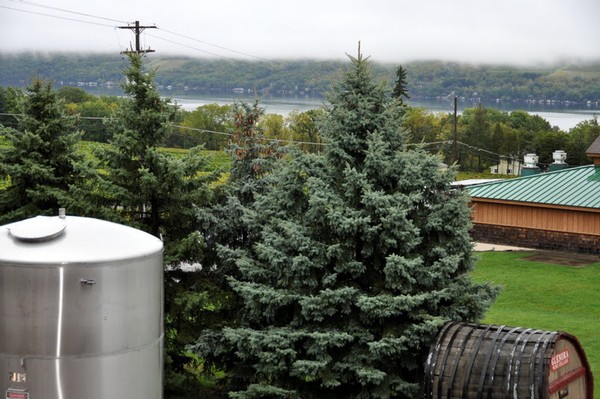 In the vineyards: Well if one was/is a purist (we do not harvest in the rain or when the grapes are wet) there would not have been much harvesting taking place this past week. Then there is idealism and realism, and realism dictates that unless there are major periods of rain, harvesting has to take place. There is a big difference between operations that have a few acres of vines and make a few hundred cases of wine, and ours which when combined consist of 140 acres of vines, and wine production exceeding 80,000 cases. In any event we, or those who grow grapes for us, using some common sense, keep the harvesters rolling. At Knapp the team harvested DeChaunac, Saperavi, Arandel, and Chardonnay. The Glenora Press deck team saw the arrival of Sauvignon Blanc, Chardonnay and Muscat. It appears that we will be starting our Riesling harvest this coming week. Steve and Rachel continue to give us "the numbers" which aid us in determining which vineyards to harvest first.

The lees floatation device: This is a tool that is saving us an extreme amount of time, energy and money. Literally, it allows us to harvest the grapes, press the grapes, and start fermentation of the juice all within hours in most cases. It works by injecting a small amount of a vegetable based material (vegetable based allows us to continue the vegan winemaking process) in to the bottom of the tank by using a small amount of nitrogen. As the bubbles rise to the top of the tank they cause the vegetable based material (sticky) to pick up the lees (small pieces of solids such skin) which then floats to the top of the tank leaving the clear juice below it . We then pump out the clear juice and dispose of the lees. We can float a 3000 gallon tank in a matter of hours (usually less than 3 to 4 hours) as compared to a day of two when using a lees filter. Another benefit: a much better utilization of our tanks during harvest. And yet another benefit: the production team does not have to spend their weekend's lees filtering in order to empty tanks for use during the upcoming week. 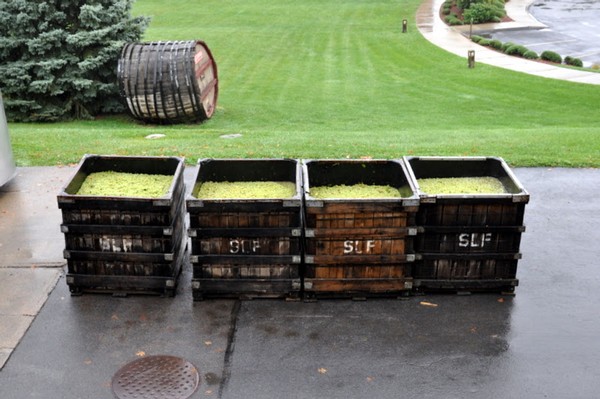 It has been and continues to be a busy week for the Inn, restaurant and kitchen teams. They hosted two bicycle groups -overnights, dinner and breakfast: along with hosting a naval group reunion. Yesterday they hosted a wedding and reception, they will be doing the same today, and tomorrow morning there will be a wedding breakfast taking place. Lots activity for the all of the teams there.

Last Sunday morning while the editor was at the Inn/restaurant, the mother of the bride approached and spent the next, at least, ten minutes telling how much she appreciated what the wedding team, the restaurant team and inn team had done to make her daughter's wedding day very special - she was enthusiastic to say the least!!. Thanks to everyone for your part in making our customers' events enjoyable.

Last Thursday evening we hosted Mass in the Vineyards, which is a service conducted by Father Steve of St. Mary's of the Lake church of Watkins Glen. The service is intended for folks of all denominations who work in the vineyards, wineries and tasting rooms that find it challenging to attend church services on Sunday. Father Steve told us that the attendance at the sevice, in spite of the weather (lots of rain), was the largest of the year. That has to be true, as a priest is not likely to be telling fairy tales. Thanks go out to Larry who helped us will the social hour afterwards. 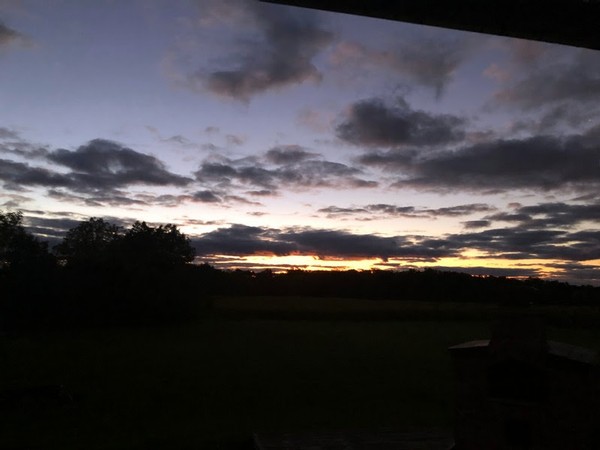 This coming Tuesday, October 9th, is the SHT-deadline day! By day's end, every employed person in NYS must have received SHT (sexual harassment training). We are not sure what happens to those who are not trained or their employers (perhaps they are deported) but we do not need to worry as our teams are now we versed on the subject, and have sighed off stating the same.

Thought for week: Opinions
"The fact that an opinion has been widely held is no evidence whatever that it is not utterly absurd."