The sky is, for the most part, clear over the vineyards of Glenora and the shores of Seneca. Temperature-wise it is a sweater weather morning - 56 degrees with the wind coming from the south southeast at 2 miles per hour. Lake temperatures: Keuka-77 degrees; Seneca-74.6 degrees. This may be the last time we see these temperatures until 2020!

In the vineyards: The conversation there seems to be mostly about harvest. When will it start? Is the equipment ready? And the remembrances of the last season's sour rot epidemic in some vineyards. Most of the conversation revolves around the dreaded Drosophila melanogaster! This pest is more common than the (also dreaded) spotted wing drosophila, Drosophila suzukii. Both of these monsters are fruit flies or relatives of the same, and as the grapes ripen they will (simply put) attach to the grapes causing them to start to sour rot - which can impact the fruit almost overnight. Obviously, the vineyard teams will be on the watch for these pests-along with the birds - because if the birds eat the grapes first, there will be no grapes to rot!

In spite of the weather, last Sunday's Jazz Greats at Glenora was another success for Team Glenora. Although we had to delay the start of the concert for about 20 minutes (lightning off in the distance) the almost 1200 people in attendance saw and heard a great performance by Euge Grove. Even with some light rain during the concert, only a few people melted.

On Monday, we held our annual team member summer picnic with close to 100 team members and their families attending. It was an "old fashioned" summer picnic - Production Manager Tracey was grilling hamburgers, gourmet hotdogs and sides from Burns' Dog Pound (some even had a lobster relish), and there were plenty of smoked grilled ribs. Maintenance Engineer Joel provided many dishes of his famous sparkling popcorn as well. And as always, Joel provided entertainment for the younger folks -balls, bats and kites. It really is great to see and meet the family members of the Glenora Team - out of uniform and fully relaxed! 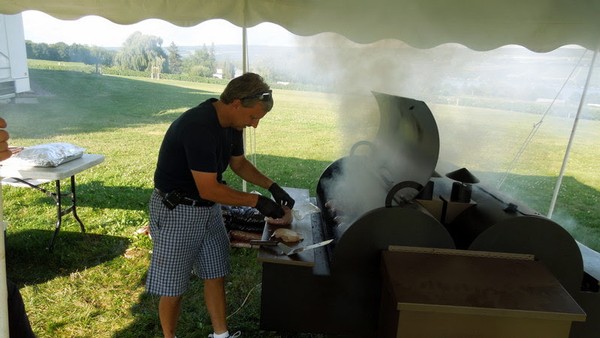 We were very pleased to see that Chateau LaFayette Reneau was one of three wineries included in an article in Luxury Travel Magazine's August 23rd edition that featured a section on Best Fall getaways. The article noted what we already know - the views from the winery and inn decks are fantastic, along with some great wines!

Last evening, Chef John and his team at Knapp's Vineyard restaurant presented their Seafood and Sunset Dinner -a summer picnic in the vineyards. It was an outside event, and attendees were able to enjoy the sun setting through the vines (and clouds) while enjoying lots of different seafood dishes and glasses of wine. Somehow, the sun managed to set about an hour earlier than planned/advertised. Perhaps it was operating on daylight savings time rather than Eastern Standard Time. Hopefully John and his team will make this event a summer tradition!

For the second consecutive year, the readers of USA Today have named the Finger Lakes Wine Region as the BEST WINE REGION IN NORTH AMERICA! That is quite a feat for an area that less than 40 years ago had less than 15 wineries in the region. Our hats are off to the early leaders of the wine trails who had the foresight to work together to promote and grow the region, and of course to the same to the many tourism and wine promotion groups who have brought attention to the area in recent years. 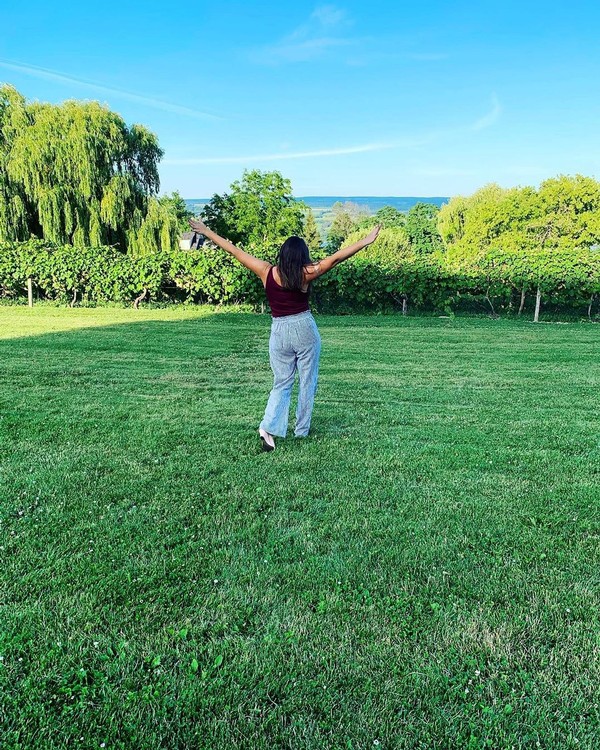 More vineyard news: Steve and Rachel continue their vineyard sampling project. Again, at this point, it appears that we are still about a week behind last year in terms of grape maturation. This was also noted by information sent from the Finger Lake Grape program in which there was a comparison showing the dates of the start of veraison in several varieties from 2018 as compared to 2019. What this most likely indicates is that the 2019 harvest season is going to be compressed perhaps into aslittle as 6 weeks for most of the wine grape varieties as the season generally ends at the end of October (the end of the growing/ripening season).

And lest we forget, it was another wedding weekend at Glenora and the festivities will continue this morning with a post-wedding breakfast. A busy weekend for the Inn, Events, and Restaurant/kitchen teams!! THANK YOU!

Thought for the week: Books
"A bookstore is one of the only pieces of evidence we have that people are still thinking."