The sky over the vineyards of Glenora and the shores of Seneca is mostly clear as we celebrate Hobbit day and mark the first day to Tolkien Week. The temperature is a relatively mild for this time of year, 65 degrees, almost 80 degrees later today. The wind is coming from the south southwest at 6 miles per hour. Lake temperatures: Keuka-69 degrees; Seneca-67.5 degrees.

In the vineyards: The weather has to be part of the story this week, as it has been almost "picture perfect" almost all week long with lots of sun and warmer temperatures. Both of these are great for ripening the grapes, as up to this point ripening has been a bit behind "normal". The Knapp vineyard team harvested Seyval and Baco this past week. Plans are to harvest Cayuga on Monday and then Vignoles on Thursday and Friday with some custom harvesting taking place in between.

On the press deck: The Glenora press deck team had Pinot Noir (for sparkling wine), Seyval and Cayuga arriving at their press deck. Another non-grape arrival was the new chiller and cooling tower that will soon be installed. Our old chiller and cooling tower were first installed in the mid-80's making them over 30 years old and like most things today, parts are no longer available. In addition, we have added several jacketed tanks (for controlling the temperature or the wine) over the years which the system was not really designed for. In the pre chiller and pre jacketed tank days -1977 to 1987- we attempted to cool the wine in the tanks by running water over them-cold water running from the top of the tank down the side. This was not the most efficient way to cool the wine and it put a strain on our water and waste disposal systems -aah, the good ole days!

The CLR press deck team (Tim and Wally) started their season this past week as well as they brought in Baco on Thursday and Friday! 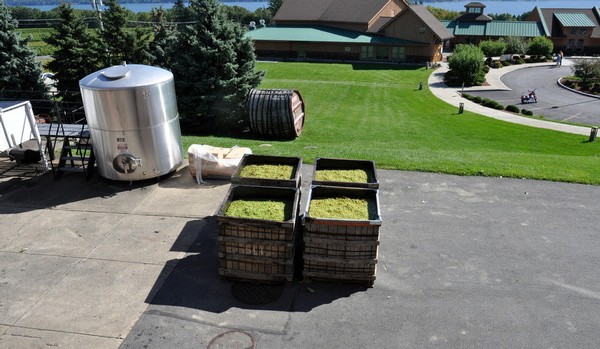 On Wednesday evening Chef John and his team conducted an off-site catering event as part of the Seneca County Chamber of Commerce's Business After Hours program. The event was special as it marked the opening of the newly updated marina at Sampson State Park. There were over 100 people in attendance - Knapp's wines were part of the festivities as well. There were lots of very positive comments regarding the food, the service and the wine. Perhaps we should consider a Catering/Food truck!!

On Thursday afternoon, the Chateau LaFayette Reneau Team hosted their new wine distributor Empire North. This is the first time that CLR has had a distributor since its inception in 1985. The benefits will be a much larger sales team in the field and a much broader range of distribution. Peter, who has been single handedly overseeing that responsibility (with a little help from the team at CLR) will work with the Empire folks during the transition.

Last weekend's Leaves and Lobster event was a very successful event for us. Accounting Manager Tracey D. reported that wine sales were the most that had ever been recorded! Another note about Leaves and Lobsters, and for that matter our Jazz Greats at Glenora concert series as well. These events are all organized, managed, and conducted by the teams at Glenora (well the Boy Scouts help with parking). The point here is that these event happen because the teams at Glenora that have full time responsibilities during the week put in the extra efforts on nights and weekends to make the events possible. This often times means 60-70 hour weeks which sometimes are 12-14 days in length. Glenora has a great team and they are very much appreciated. There is not a single department that does not contribute in some manner.

Windmill report, otherwise known as "The Mill": The team there keeps on rolling -to date their sales are up 34% over last year-and we get lots of positive reports from customers at "The Mill" as well as compliments from the management there. Thank you ladies!

Thought for the week: "Dragons"
"It does not do to leave a live dragon out of your calculations, if you live near him." JRR Tolkien