The sky is partly cloudy and somewhat overcast this morning over the vineyards of Glenora and the shores of Seneca-the weather gurus tell us there could be thunderstorms. The temperature is 75 degrees but feels like 80 degrees due a humidity reading of 89%. The wind is from the southwest at 4 miles per hour, Lake temperatures: Keuka-79 degrees; Seneca-77.6 degrees.

In the vineyard: It has been a warm (hot) week there with temperatures in the high 80's most days and even into the 90's during a couple of days-the humidity made those temperatures feel even warmer. We have seen, in some of the vineyards, an invasion of undocumented aliens -"Pacific Rim beetles" who enjoy eating the newer foliage. Also, we noticed traces of powdery mildew in a few locations. Needless to say, the vineyard teams were out and about applying protective sprays. Knapp Vineyard Manager, Chas, even cut his vacation short to return to combat the alien Pacific Rim beetles-Thanks Chas. The teams also continue with summer pruning and hedging-the idea being to keep the fruit exposed for ripening and protective sprays.  Side note-the editor learned this past week that there are a few patches of posion ivy in the vineyards-but not for long!!

Last Sunday evening brought about the return of the Finger Lakes Wine Festival teams. For the festival teams that was the last gig of the season as we now roll into the concert and Leaves and Lobster seasons. As always there are observations from the wineries who attend the event, most of which are related to their sales. Our sales exceeded last year-great wines and a great sales team!! Speaking of the Festival, the editor had the opportunity to chat with Susie and Doug Knapp founders of the Finger Lakes Wine Festival in 1993. Doug, Susie and their team operated the festival during the years of 1993 and 1994 before selling it the folks at Watkins Glen International. The WGI folks did not hold a festival in 1995 as they wanted to "learn the ropes" as their primary business at that time, and still is, a venue for automobile racing. WGI opened the Festival Gates in 1996 and consequently just finished the 23rd Wine Festival Season there. So if one adds the two years of the Festival under the management of Susie and Doug to the 23 years that WGI has operated the festival -The Finger Wine Festival has 25 years in its glass-we have participated in all of them!  Today there are wine festivals almost every weekend however the Finger Lakes Wine Festival was the pioneer Festival!

As mentioned last week this is a busy weekend for team Glenora, Knapp and Chateau as we will be participating in The New York Drinks New York program, the New York Wine and Grape Foundation's Export Program, and the FLXcursion program. These programs started yesterday and will be running through Monday. For Team Glenora this is addition to hosting two weddings and the Jazz concert. All of this takes a lot of planning, coordination and implementation. Today at Glenora alone there will be or have been well over 125 team members taking part in activities -kitchen, restaurant, Inn, housekeeping, retail, concert, parking, traffic directors, setup, cleanup, wine and food sales at the festival tent, and more. 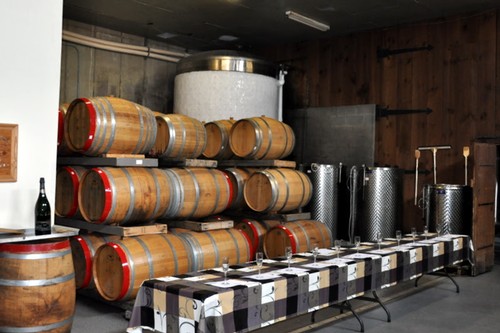 Executive Chef Orlando reports that the new hood and exhaust fan system is being installed in the kitchen.  This is a unit located over the stoves and fryers that draws out cooking fumes and heat. When the installation is finished the hood and fans will keep kitchen much cooler which obviously benefits those working there, along with less heat stress on the other equipment. Unfortunately the installation is taking a bit longer that anticipated -a some confusion on the part of the seller about 110 vs 220 volts. If one thinks ii has been hot outside this past week you should have been in the kitchen. You may have heard of the saying= "if you can't stand the heat, get out of the kitchen" -our kitchen team has stuck it out!! Thank you!

Don't forget, like the editor did as he showed up for  the wine dinner last evening at Knapp, that the dinner is next week when Chef John, and his Team at the Knapp Vineyard restaurant will present their monthly wine dinner which is themed Louisiana Boil, and as usual will be accompanied by Chateau LaFayette Reneau, Glenora and Zugibe wines. A special twist was will be live Zydeco music-dancing in the vineyards??!!  Next month the Theme is "The Garlic Wine Dinner" The 2019 garlic harvest will have been completed and Chef John celebrates that event with many unique garlic dishes. This dinner, like most of the Wine Dinners, sells out so if you want to take part sign up soon. 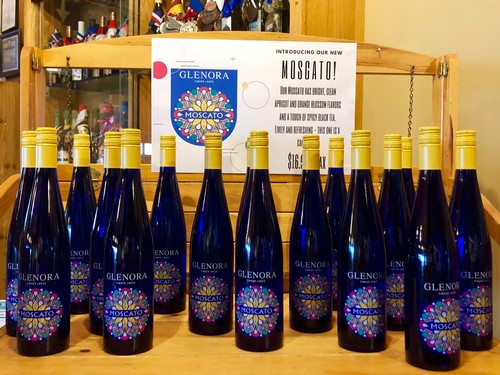 On Friday our newest wine release appeared in the tasting room at Glenora-our 2018 Moscato. It arrived in a bright blue bottle and with a very distinctive label. Lots of time was spent in the creation of this wine and its packaging-once again thanks to all involved!

Thought for the Week:     Inspiration-Attitude