The sky is cloudy this morning over the vineyards of Glenora and the shores of Seneca. From the temperature readings it would seem winter has arrived but we still have another month of Fall according to the calendar. The current temperature Is 35 degrees however it "feels like" 27 degrees due to the wind which is coming from the south southwest at 10 miles per hour. Lake temperature: Keuka - 53 degrees.

In the vineyard: The 2019 harvest at Glenora, Knapp, and CLR is finished with the CLR team "wrapping it up" on Monday when the Mason Road Cabernet Sauvignon, and the Petite Verdot at CLR were harvested. We certainly appreciate the efforts of the vineyard teams in bringing in all of the grapes. The season starts out with short sleeved shirts and ends up with sweatshirts, heavy jackets, and Carharts! There is always a lot of moving parts to the harvest season, and depending on the vineyard, the winery and the weather the picking schedule needs to be flexible. For people who need a structured work day/week the harvest season would be very stressful. Thanks go out to Chaz, Jeffery, Bob, Brent, and Corey - the harvest team!

With harvest ending this past Monday, the Vineyard teams quickly "changed gears" as they power washed and greased the harvester, making notes of all of the items that will need attention before harvest next year. They rounded up all of the bins that seem to grow legs during harvest, power washing them as well and making repairs as needed. There is one winery where we deliver grapes that seem to play "bin bumper cars" when they unload and empty the bins - they also fail to risnse the bins which is and has been a winery courtesy since the beginning. The teams also started "hilling up" in several of the vineyards. Hilling up consists of pushing soil up and over the graft at the base of the vine to protect it over the winter. 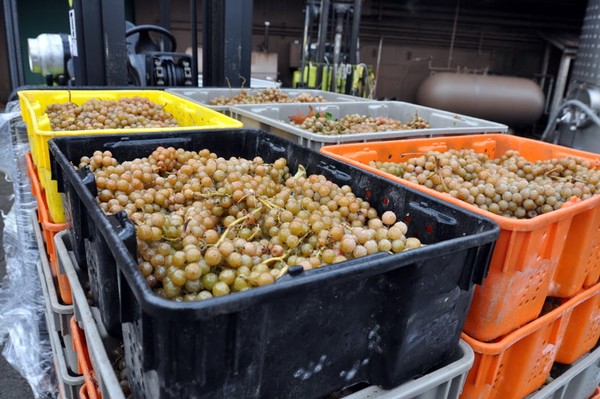 On the press decks: While the harvest (picking) finished on Monday the press deck teams stemmed, crushed and then placed the Cabernet in red fermenters on Monday. They also started to press our "iced Wine" grapes on Monday, however that was cut short by a "stripped gear" on the Wilmes Press's motor. So a quick trip was made to Knapp where we have an identical press. Thanks to the efforts of Tracey, Chaz and Brent, the motor on that press was removed - quite a project has it had been in place for over 40 years with several coats of paint on the nuts and bolts that held it in place. However with some prayers (or were they cuss words?) the motor came off and the "Iced Wine Grapes" were pressed and the juice is now in the tank. A side note - pressing "Iced wine Grapes (frozen) gives us a yield of 45-60 gallons per ton as compared to 170-175 gallons per ton from the same fruit that was not frozen.

Yesterday marked the 43rd anniversary of a Nouveau Wine Celebration at Glenora. The event was first started at the end of harvest in 1977 to celebrate our first year of harvest/winemaking. It was a rather small event at which we invited all who had helped us establish Glenora during the year of 1977. We had started the year with a site on which an old barn had stood, and by years end we had 4500 cases of wine in the tanks-10 months. The event was original called Foch Nouveau as Foch grapes were the grapes used. It has now become "Nouveau" because we no longer make a Foch wine although the vineyard is still alive and well. One tradition did end this year and that was Henry the Hogg was not roasted on a spit or smoked - he was cooked in an oven. That decision was made when the weather forecast came out earlier in the week. Starting the smoker at 6 AM and standing by it when the temperature is 25 degrees for 6 hours is no longer considered fun - even when fortified with a glass of two of brandy. Thanks go out to Joel and the Maintenance team for keeping us warm, the kitchen and restaurant team for the great food, and to the administrative team for all of the organization. 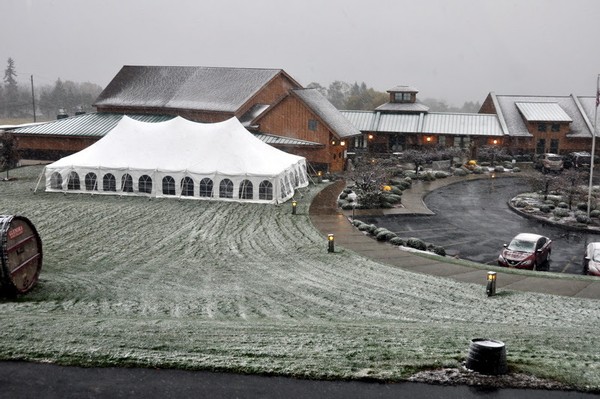 Bob, who assists us with marketing and sales, returned from the American Wine Society meeting in Florida carrying a plethora of medals won by our wines, including one for the best white Vinefera wine in the commercial wine competition (wineries from across the US) - our 2019 Select Harvest Riesling! While all of our wines are the efforts of our entire cellar/production team, Winemaker Rachel took the lead on this one -Congratulations Rachel!!

While 2020 is 7.5 weeks away, plans are being made or finalized for some of the early years events which include Pasta Night, Fish Fry Fridays, Steak and Potato, the Bridal show and the early year Wine Trail events. There are several "twists" in store for these events. We also will have a new program - a monthly signature wine. More to come as we do not want other readers of the Gazette to plagiarize it.

Thought for the week:  Thought-Ideas
"True originality consists not in a new manner but in a new vision."